Live Free or Die! is a serial comedy/drama focused on urban expatriate Edward Dewey and his experiences at “Misty Mountain”: a present-day New Hampshire commune.

Posted on 19 Oct 2013 Comments Off on Stills & Collateral

"I get it. You're not coming with me." Driving alone, somewhere in Vermont, lured away from the office by a benevolent siren, Drew Matthews is Edward Dewey in Live Free or Die!

Theseus had the Labyrinth and the Minotaur. Edward Dewey has the Cogs & Widge headquarters and his manager (W. Scott Parker, III). As fate would have it, both Edward and the manager are UMass Lowell alumni. And in this scene, the latter -- looming great and terrible -- leads a less-than-enthusiastic Edward in a UMass Lowell River Hawks cheer. 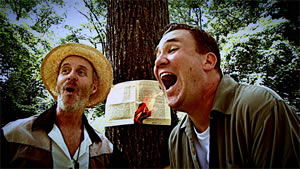 In an 1819 letter, Thomas Jefferson wrote that "[L]aw is often but the tyrant's will, and always so when it violates the right of an individual." Sylvan philosophers, Jeffersonian idealists, and earnest literalists -- Roger Crab (Rob Neukirch) and Walter Tobin (Bo Keister) exact their own form of civil disobedience against the latest pronouncement from Triby McDermott: Misty Mountain Commune's self-appointed, and much suffering, lawman. 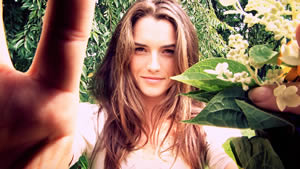 "Live here or visit? You should know, 'dear reader,' the second half of that sentence might be misleading." From the malevolent to the benevolent, every culture has its sirens, goddesses, and muses. The world of Live Free or Die! has May-May Lilburne (Riane Hoffman) whose grace, goodwill, and charm -- evident even behind the cool, glassy glare of a computer screen -- hasten Edward Dewey's hero's journey to Misty Mountain Commune.

Ecce Lelio Sozzini: humanist, Byronic spirit, Misty Mountain Commune's media developer, and primary deacon in the Internet Church of Zazoo Bonehead -- if John Lilburne (a.k.a, "Freeborn John") and his wife Mary are the Hector and Andromache of Live Free or Die!, Lelio is Pythagoras. In May-May's words, "He lives on top of Misty Mountain. There's no one in the entire state higher than him at any given moment. And you better believe that's the way he likes it, sitting just below God, looking down on his little ant farm."

Jesus, Odysseus, Beowulf, Gawain, Hamlet, Superman -- the same hero has a thousand faces, and when he sets out, he does so alone. In Live Free or Die﻿!, when it's time to make his exit, Edward Dewey passes through the dispassionate mechanics of the Cogs & Widge industrial floor to embrace the rustic beyond. Misty Mountain Commune﻿ and her cast of characters await.

In the Live Free or Die! pilot, just as his liberation begins, Edward Dewey finds his stream of consciousness diverted by a gigantic rock, namely, a rogue AM radio channel playing his employer's jingle. Just when he thought he was out, Cogs & Widge pulls him back in.